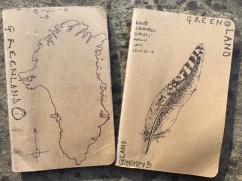 Author Robert Macfarlane on his preference for physical notebooks over digital notes:

People sometimes ask me why I don’t use a phone to take notes when I’m ‘out’ in the field. The answer is that phones smash, while notebooks bend. I also like the way that notebooks record where they’ve been not just in terms of what’s written in them, but also in terms of the wear they bear as objects.

On the types of notebooks he uses:

The notebooks vary from a tiny lilac-coloured Moleskine just seven or eight centimetres high, to robust hardback journals, tough enough to withstand being dragged through limestone tunnel systems and soaked in slate mines.

One of the advantages of carrying around a physical notebook is the ability to tuck found objects into the pages or the envelope sometimes found at the back:

I also tend to tuck things into the pages of my notebooks, which flutter out later and surprise me. When I was in East Greenland, camping for weeks by the calving face of a huge glacier called the Knud Rasmussen, I picked up three ptarmigan feathers, and two iridescent ‘books’ of mica, and put them into the back of the two notebooks I filled up in that time. Two years later, I opened the notebooks again – and there was the mica, glittering away, and there were the feathers, as if fallen straight from the bird, pulling my memory instantly back to the cold, off-planet atmosphere of the glacier.

via Penguin Books from an original post by Austin Kleon