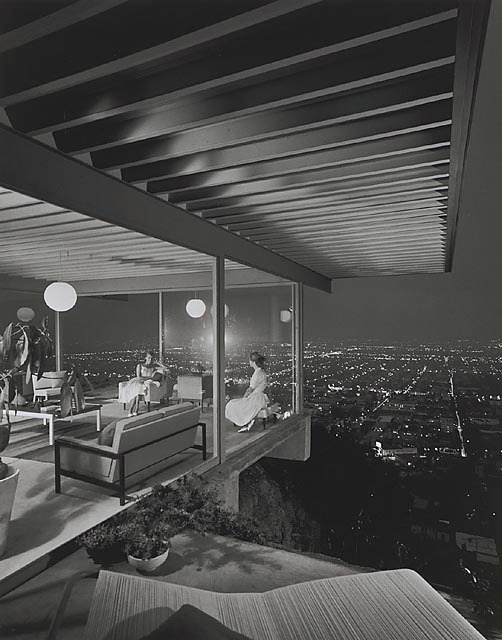 One evening in May 1960, Julius Shulman, regarded as the world’s greatest architectural photographer, took this photo of architect Pierre Koenig’s Stahl House. The glass-enclosed house in the Hollywood Hills, with Los Angeles sprawling below it, was one of 36 experimental Case Study Houses designed to extoll the virtues of modernist theory and industrial materials (Stahl House was Case Study House No. 22). The photo has been called “the most successful real estate image ever taken” and Shulman himself declared it as “one of my masterpieces.”

In the documentary Visual Acoustics, which celebrates Shulman’s life and work and was made just before his death in 2009 at the age of 98, he describes how the extraordinary photo above came about quite by accident:

While my assistant was setting some lights for me I went outside and looked at that view just for curiosity. Oh gee, I said, looking at the girls who were sitting there, girlfriends of two of the architects who work with Pierre Koenig. They didn’t know they were gonna be in the picture. They just were in conversation.

Shulman’s photo became world-famous: “It perfected the art of aspirational staging, turning a house into the embodiment of the Good Life, of stardusted Hollywood, of California as the Promised Land.” (Time)